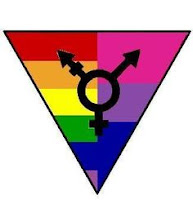 The male and female signs that greet us at the toilet door offer us two very binary options, but in reality sex and gender is far more complicated than those signs suggest. Sex is never as simple as a binary choices, and it is this that queer theory wants you to understand; that all our pre-conceived ideas about gender roles and sexual identities are in fact unstable, and can be destabilized by simply picking them apart. Queer Theory is a relatively new cultural theory which emerged out of the 1990s, but very much has its origins in the work of Michel Foucault. It looked to establish sexual orientation as a fundamental category of analysis and understanding, and thus it has both a social and political aim. It is a criticism informed by a resistance to homophobia and heterosexism by exposing the ideological and institutional practices of heterosexual privilege.

It was the feminist critics of the 70s that first began to explore and dissect gender, but the feminist outlook soon began to face growing criticism. Some critics believed that feminism was universalizing the experiences of white, middle class, heterosexual women and found it difficult to accommodate voices of different races, cultures and sexuality. This issue was first brought to the foreground by women of colour such as Bell Hooks. In her work, Ain't I A Woman?: Black women and Feminism she writes:

This message was echoed by lesbian critics who felt feminism was dominated by heterosexual voices. In her work, What Has Never Been: An Overview of Lesbian Feminist Criticism, Bonnie Zimmerman attacks what she calls "the perceptual screen of heterosexism" that is at the heart of feminist criticism. She claims that this screen of heterosexism prevented any considerations of lesbian issues in pioneering feminist writing. The argument was countered by suggesting that lesbianism was in fact the purest form of feminism; that relationships among women constitute a resistance to existing forms of social relations, and so, is a rejection of any collusion with patriarchal exploitation. The issue of essentialism was at the heart of these debates. Feminism believed that sex was essential to identity; that there were common, rigid, identity traits shared by all women, but lesbian theorists wanted to move away from that idea. It was not until the 90s that lesbian theorists began to shake off the essentialism of feminism, and establish itself within a separate sphere of study we now call Queer Theory.

After lesbian theorists split from feminism, they began to make new allegiances with gay men and adopted the term queer theory in spite of the homophobic origins of the word. Queer theory would reprioritise sexuality over gender as the most fundamental in personal identity. This identity was accepted as not an inherent, essential, unchanging category, but part of many complex factors. There is also a key theoretical difference between queer theory and feminist theory. Queer theory takes a primarily post-structuralist approach as post-structuralism concerns itself with binary language such as hetero/homo. Diana Fuss in Inside/Out: Lesbian Theories, Gay Theories claims that one of the primary goals of queer theory is, "to call into question the stability and ineradicability of the hetero/homo hierarchy."; to challenge the distinctions and dichotomy of the homo/hetero binary. Gender theorist Judith Butler goes as far as claiming the very concept of homosexuality is itself a part of homophobic discourse as it only exists in relation to that which is hetero.

From a literary point of view, one of the challenges of queer theory is the inevitable difficulty in deciding what texts are lesbian and gay texts. You could use, as a starting point, a text written by a lesbian or gay person, but how do you determine who is a gay or lesbian person, considering queer theory is an anti-essentialist philosophy. The same can be said about a criteria for a text written about a gay or lesbian character. A third criteria is texts that express a lesbian or gay vision, but there is wide debate over how to define such a vision. It is also important to note that queer theory devalues literary realism since it depends on fixed identities. The omniscient narrator is problematic to queer theory as it presents to the reader events from a fixed intellectual and moral position. Queer theory is far more interested in texts with anti-realist elements; a fluidity that is more compatible with its philosophy. This would include genres that subvert realism in some way such as the thriller, comic novel, parody or sexual fantasy writing.

So what is the role of the queer critic? Queer critics:

Jose Muñoz has further complicated queer theory by discussing the role of racial and ethnic minorities. As queer theory was founded primarily by white people he questions if even the notions of queerness need to be destabilized. The debate is still thriving and queer theory has fully established itself as an important form of criticism.  It does not only deal with matters of sex, but goes to the very heart of our identity; asking us to question who we are?  It offers us a new way to look at and critique literature. Why does Victor Frankenstein attempt to create a "beautiful" man? Why is Peter Pan played on stage by grown women? These are interesting questions that would have never been asked if it was not for the emergence of queer theory. Get out there and begin queering a discourse!

Popular posts from this blog

March 14, 2016
Boris Eikenbaum Russian Formalism and New Criticism very much go hand in hand under the umbrella term of formalism. They share similar qualities in that the focus of their study is on the text itself and dismisses the importance of the author. This school of literary theory came out of the will to reform outdated approaches to literature, in Russia, in the early part of the 1900s. It was Boris Eikenbaum who set about recording the principles of this school of theory in his text Theory of the Formal Method. As with  New Criticism, close reading is the key tool for the Russian Formalists with a heavy focus on language, syntax, grammatical construction and the sounds of words. It is the job of formalist critics to consider how these elements function and contribute to the form of the poem. Remember that the form is not what the poem is saying, but how it is saying it. What the poem is about is of no interest to formalists. The very basis of Russian Formalist theory is centered
Post a comment
Read more

What's in a Name? Naming and Denaming in Romeo and Juliet's Balcony Scene

November 29, 2016
How now reader? With my Masters course entering that busy time of year, I have been inundated with work and the blog has been somewhat neglected (and will probably continue to be so). Having said that, I thought I would take a few minutes to share some thoughts on Romeo and Juliet 's infamous balcony scene and the importance of naming and denaming. In Romeo and Juliet names are an integral part of the character’s lives - particularly their family name. Whether they are Montague or Capulet will determine who they can associate with and where they can go in Verona. Shakespeare knew the importance of titles in early modern England first hand. In the same year he wrote this play, his father, John Shakespeare, was refused the right to a coat of arms, and the use of the title “gentleman” that came with it. In 1596, Shakespeare himself was successful in renewing the petition on the family's behalf. Shakespeare had also already written about perhaps the most famou
Post a comment
Read more

June 23, 2014
I have decided to spotlight the poem “The Red Wheelbarrow “ by William Carlos Williams. This poem is perhaps the most famous example of imagist poetry.  Imagist poetry is centred on one exclusive image, an image so deeply focused that it becomes the poem itself. Imagists insisted that a poem should get its power, not from the poet’s clever style, not the symbolism of its content, but from the emotions evoked by an image (An idea that can be traced back to the Japanese Haiku of the 16 th century).  Williams was an imagist whose aesthetic principles were largely focused on everyday life and the common man. It was an aesthetic that went against the grain of the critically acclaimed poets of the day such as the classicist, academic, and formal poetry exemplified by the likes of T. S. Eliot. “The Red Wheelbarrow” is a poem composed of a single sentence broken up at various intervals. The poem’s opening lines set the tone for the entire poem, and its form and meaning are unite
Post a comment
Read more